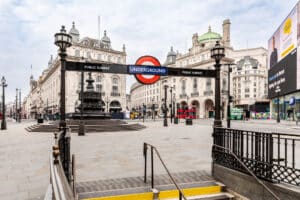 The latest GDP figures showing the country’s record recovery after the first lockdown highlight what a catastrophic decision it was to impose an unnecessary second shutdown.

Britain briefly lifted out of recession in the summer, posting a massive 15.5% growth in the three months to September.

The economy shrank in the first three months of the year and contracted by a record 19.8% in the April-to-June period of the first lockdown. Two consecutive quarterly contractions usually mean the economy is in a recession.

Normally they are as a result of a banking crash or some other financial-driven catastrophe, rather than a microscopic bug that has impacted severely on the health of the population and as well as our economy.

But the following quarter’s sharp rise lit the way to V-shaped recovery and lifted us out of that recession. This was predicted by me and other business owners who urged the Government not to overreact and pull the plug for a second time.

Britain’s bounce back was mirrored by Pimlico’s own recovery.

Last month, we showed what a V-shaped recovery looked like with sales rising by £650,000 to £10.9m for July, August and September after the first lockdown, compared to the same period in 2019.

But nobody needed a crystal ball to predict what impact renewed restrictions would have on future prospects. Sadly, the Government turned a deaf ear to our pleas, and the chance for a quick recovery was squandered.

The economy is likely to take another hammering this month as the effects of this lockdown take effect – October won’t be pretty either.

The Government has dithered and dallied. It is clear we were shunted into the latest restrictions on the basis of some dodgy data and Boris is reportedly annoyed, no doubt aware that he has hobbled our recovery hopes.

There will be plenty of business owners now watching their hard work being flushed down the toilet, who will rightly be furious and wondering why they weren’t supported by the so-called ‘party of business.’

It could have all looked so good, with everyone hailing the Boris bounce. Instead, we have a Johnson slump.

However, the prospect of a vaccine being rolled out before Christmas has provided an unexpected boost. The Government should capitalise on this bout of positivity and end the shutdown now, not let this nightmare drag on until December 2, while there is still the possibility of averting the worst of the damage.

The Prime Minister and his party need to shrug off the ‘stuff business’ attitude of recent weeks, lift the restrictions stifling trade and get us all back to doing what businesses do best once again.