Could Brexit be the construction sector’s greatest challenge? 04 Dec Could Brexit be the construction sector’s greatest challenge? 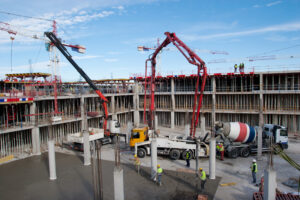 There is less than one month to go before the end of the Brexit transition period. From midnight on 31 December, the UK will be ‘on its own’ as far as Europe is concerned.

With this in mind, here are six critical challenges that the UK’s construction industry (in common with various other sectors) faces from 1 January 2021.

Arguably this was the industry’s greatest challenge even before Brexit came on the horizon. In his excellent report “Modernise or Die “, Mark Farmer raised several key questions about the existing and future demographics of the construction industry. For many years the industry has struggled with a lack of skilled (and indeed unskilled) labour. Given the heavy reliance of the sector on migrant labour (with approximately 15% of the UK’s workforce being non-UK citizens) an already challenging situation is in danger of becoming a full-blown crisis.

During the period when the UK was an EU member state, we saw growing alignment (and improvement) of standards regarding quality of materials. This did not, of course, make the industry immune to controversy – the Grenfell Tower tragedy is devastating testament to that fact. But any suggestion that withdrawal from the EU will bring a more straightforward and effective regime of controls and requirements to comply with standards is far-fetched. In particular, it remains uncertain whether there will be a comprehensive system of quality control (replacing the CE mark that had become familiar to most) post-transition. The UK Conformity Assessment (UKCA) came into play earlier this year and the Construction Leadership Council has provided some helpful guidance.

However questions remain about, for example, recognition of testing standards.  There are also more general issues concerning the approach that contracting parties will adopt if substitute materials need to be used, whether or not this falls outside the terms of the contract and who will pay. Similar issues arise in relation to movement and cost of products.

The absence of any clear trade deal will bring uncertainty as to availability (and likely cost) of goods and products sourced from overseas. For many sectors (construction included) such uncertainties can have a material impact upon contractual outturn. This raises the question of whether it is the client or the contractor that has to bear any resulting cost increases.

Then there is the risk of delays hitting projects, particularly where supply chains have been arranged to achieve “just in time “delivery; the absence of smooth border controls may have a significant impact here.

Each of these three points may well impact upon contract negotiation in terms of how risk is allocated, particularly on matters of time, cost and quality.

In addition, there are three further areas where more general questions exist about whether or not the UK will benefit from being outside the EU.

It was widely claimed that the end of EU membership would bring about a more straightforward business environment and less bureaucracy.

However, the experience of the last three years or so has shown that this is most unlikely. With the number of trade agreements growing and multiplicity of standards, it seems highly probable that the amount of red tape will increase.

One immediate effect of the UK’s withdrawal is that it will no longer have access to the European Investment Bank (and Fund). The Government’s future spending plans (and the drive to build back better) are ambitious. However, with the significant level of (unforeseen) spending in 2020, that ambition will be seriously challenged.

Another part of the Government’s strategy that has attracted attention is the plan to build greener (which forms part of the EU ambition). The Government has sought to give assurances that there will be no substantive change in policy and that the intention is for a smooth transition on matters such as environmental impact assessments and hazardous substances regulations.

A common thread exists across all of these six challenges, namely that with discussions around a trade deal with the EU still inconclusive, there is a significant lack of certainty as to what the future holds. Whilst there may be a growing sense of optimism that 2021 may bring better news about COVID-19, it is difficult to see how the same can be said about the impact of Brexit.

Read more:
Could Brexit be the construction sector’s greatest challenge?