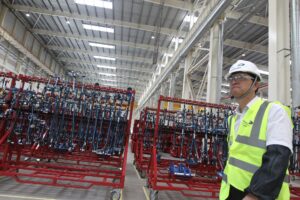 The number of cars built in Britain fell again last month and the Society of Motor Manufacturers and Traders has predicted billions of pounds of lost production in years to come.

Car production fell by 1.4 per cent year-on-year in November, meaning that production in 2020 so far is down by 31 per cent compared with a year ago, representing a loss of 380,809 models at a cost of about £10.5 billion to the sector.

Moreover, the society warned yesterday that the car industry is on course to produce fewer than a million vehicles this year for only the second time since the early 1980s, with potential further production losses amounting to £55.4 billion over the next five years if the sector is forced to trade on World Trade Organisation conditions.

Production fell in November to 106,243 cars amid the second national lockdown. The 1.4 per cent monthly drop is smaller than other months this year because November 2019 was a weak month for manufacturing as carmakers shut factories in anticipation of a no-deal Brexit on October 31.

More than four out of five cars built in November were for export, which the SMMT said highlighted the “critical importance” of free and fair trade with global markets.

Mike Hawes, the society’s chief executive, said: “Yet another decline for UK car production is of course concerning, but not nearly as concerning as the new year nightmare facing the automotive industry if we do not get a Brexit deal that works for the sector.” He said there was “no other option” for the “long-term survival of UK Automotive”.