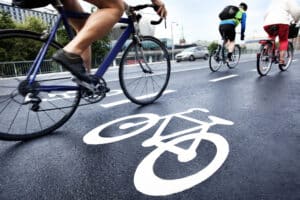 Sales at Halfords shifted up a gear in the last quarter of 2020 as the bikes-to-car parts retailer rode a lockdown cycling boom.

Its shares jumped by almost 8 per cent, or 22p, to 299½p after it said that its sales had increased 11.5 per cent in the three months to January 1.

However, the company warned that bike sales were likely to be lower in the next three months of bad weather.

It added that it was still deciding whether to repay the government’s furlough money and would “provide an update when the Covid-19 situation becomes clearer”.

Halfords said that there had been a 35.4 per cent rise in like-for-like cycling sales, below the 49 per cent like-for-like growth in bike sales for the overall financial year so far. “Lockdowns weakened demand and supply chain disruption delayed stock arriving into the business,” it said.

Like-for-like sales of motoring products fell by 8.4 per cent in the third quarter, compared with an 18.2 per cent fall for overall the nine months.

On January 4, England entered its third lockdown. Halfords, which operates 443 stores and 367 repair shops, said that the hit to its motoring business was expected to be less severe than when the economy was first closed down last March, prompting many people to switch to cycling and away from using public transport or cars when the weather was fine.

Jonathan Rock, an analyst at Globaldata, the market research consultancy, said: “The cycling boom, responsible for much of the specialist’s growth this year, has begun to slow down just as it enters this winter decline.” The delay in a decision on furlough money suggested that “this is still necessary to the business”, he said.

Graham Stapleton, chief executive of Halfords, said: “We are pleased to have delivered a strong performance under hugely challenging circumstances, including our best ever Christmas week.”