Plans to send out over 400,000 rapid covid tests as Boris Johnson plans easing of lockdown 17 Feb Plans to send out over 400,000 rapid covid tests as Boris Johnson plans easing of lockdown 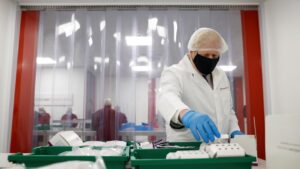 Boris Johnson is drawing up plans for a testing blitz of millions of people in England as the Covid-19 lockdown is eased.

NHS Test and Trace is preparing for nationwide “surge” testing under which more than 400,000 rapid lateral flow tests will be sent by post to homes and workplaces every day, The Times has learnt. The aim is to get the country to “a new normal”.

A campaign provisionally called “Are you ready? Get testing. Go” will begin before schools return, to encourage people to have a test even when they do not show symptoms. Ministers hope that it will be led by household names.

The prime minister will give details of the testing programme on Monday as he publicises his road map for easing the lockdown. The resumption of normal life is to be tied in part to the use of lateral flow kits, which deliver results in 30 minutes, but are less sensitive than PCR laboratory tests.

The medicines regulator has previously expressed extreme caution about lateral flows being conducted by untrained people and it is unclear whether the government has formally sought its advice.

Dominic Raab, the foreign secretary, refused to be drawn on a timetable for easing lockdown before the prime minister’s statement on Monday. He told LBC: “There’s no single cast iron formula or one particular indicator that above all other considerations can decide this . . . so we’ll look at all of the indicators, all of the evidence.

“We know that the vaccine has had a significant role, you can see from the seven-day data on cases, hospital admissions and fatalities that we’ve moved in the right direction, and the PM will set the roadmap out on Monday.”

Officials at Test and Trace are working on the assumption that schools will return on March 8, shops, universities and further education will open in late April, and that hospitality, leisure and sports will follow in early May. These dates are thought to be fluid and continue to depend on the vaccine programme and infection numbers.

All schoolchildren will be offered tests twice a week once they go back, as will their parents and support bubbles. A similar policy is likely to apply to teachers and their close contacts. Combined with existing tests for people having to leave home for work during the present lockdown, about 68 per cent of England’s population will be eligible for repeat rapid tests next month, according to documents seen by The Times.

Anne Longfield, the children’s commissioner, endorsed the plan, telling Times Radio that mass testing would “allow schools to open and stay open in a confident way”.

A further surge is being planned for between April and May, which will include the supply of lateral flow tests to both large and small businesses as people go back to work. People will be able to order free tests online and also pick them up from pharmacies.

Royal Mail has been instructed to prepare initially for the delivery of 400,000 a day, or nearly three million a week, although by April one estimate has the government supplying about 75 million tests a week.

One minister with knowledge of the plans told The Times: “The vaccination programme is going better than we could have hoped, but testing is the key to getting the economy going again.”

The government is already trying to introduce workplace testing to companies open during lockdown, with the lateral flow type available to those with more than 50 employees. Transport for London has opened four asymptomatic test sites in the capital for its employees. Primary school and nursery staff who have been looking after the children of key workers have been taking tests at home twice-weekly since late January.

The plan chimes with the prime minister’s insistence in recent days that vaccination passports should not become a feature of domestic life.

The news came as an official evaluation concluded that contact tracing was having only a “relatively small” effect on the pandemic and was unlikely to reduce the R rate by much more than 0.1. Much of the impact of the £22 billion Test and Trace scheme comes from people isolating when they have symptoms, according to estimates published by the Department of Health and Social Care. Baroness Harding of Winscombe, head of Test and Trace, has justified the programme to MPs on the basis that it was reducing the R rate of the virus by 0.3 to 0.6.

Professor Mark Woolhouse of the University of Edinburgh, a member of the government’s SPI-M advisory group, said that much of the transmission had happened by the time contact tracing began. He said: “We need a better mass testing strategy based on testing on request — just make testing available when people want it.”

A health department spokesman said: “Testing and tracing is helping us bear down on the rate of infection . . . We have not finalised our further plans for testing.”