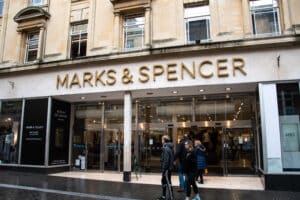 The high street retailer has launched a consultation on its plans to redevelop the shop in central London. Lower floors will continue trading as M&S, with in-store digital shopping technology to promote products from M&S.com. A development partner will convert the upper floors into high-quality office space, which M&S believes will attract demand from tenants despite companies such as HSBC, KPMG, Standard Chartered and Lloyds announcing plans to cut office space as they shift to permanent hybrid working models, where staff spend some days in the office and some days working from home.

Marble Arch is M&S’s largest shop, with 160,000 sq ft of trading space. The rise in online shopping, which has accelerated during the pandemic, has reduced demand for bricks and mortar outlets. About 16,000 shops shut for good last year and a further 925 have closed in the first two months of this year.

Big high street brands including John Lewis have begun exploring alternative uses for parts of their large shops, such as co-working space and flats.

M&S’s proposed redevelopment forms part of its “never the same again” strategy to modernise the business and learn lessons from the pandemic.

The retailer said it would “unlock value from the site as well as retaining a modernised store in the west end of Oxford Street, delivering the best of M&S for customers, colleagues, communities and shareholders.” Staff working at the branch will be redeployed to other shops before returning to Marble Arch once the development is complete.

The pandemic has taken its toll on M&S’s finances, with the retailer reporting its first loss in its 94-history as a public company. In November it reported a £87.6 million statutory loss before tax for the six months to September 26 after its clothing shops were forced to shut for half of the period. This compared with a profit of £158.8 million the year before.

M&S could boost its cash balance by selling or sub-letting part of its property portfolio. It owns about 40 per cent of its shops and other accommodation on a freehold or long leasehold basis. The company holds the long leasehold on the Marble Arch store. The freehold belongs to the Portman Estate, which owns 110 acres around Marylebone.

Despite the sharp fall in office lettings during the pandemic as corporates shift to home-working, office property values in the west end of London have remained high as investors from around the world search for yield in a low-interest rate environment. Rents for high quality space has remained at pre-pandemic levels, according to Knight Frank, the property consultancy.

Westminster city council has launched a £150 million initiative to lure people back to the Oxford Street area, which was Europe’s busiest shopping street prior to the pandemic. Plans include creating a 25-metre high grassy hill, called the “Marble Arch mound” with views of Hyde Park, Mayfair and Marylebone.

Jace Tyrrell, chief executive of the New West End Company, the local business improvement body, said: “With Crossrail opening in the next 12 months, Oxford Street’s appeal not only for retail and leisure, but for office space will only continue to build.

“This continued level of investment, building on the £150 million public realm commitment from Westminster city council, is a sign of a sustainable, agile and altogether stronger future for the district, creating a more exciting economic hub that will remain competitive on the global stage.”